Skip to content
Some links may be affiliate links. We may get paid if you buy something or take an action after clicking one of these -> Full Disclosure
Check Offer Price

Yamaha YDP 103 Review : As you know almost all of the Digital Pianos of YDP series (Arius) are upright console pianos and YDP 103 is no different.

No doubt, YDP 103 is a great piano to introduce you to the joy of playing the piano. Also check YDP 163

It is available in 3 colors Black , Black Wallnut , Dark Rosewood. All of these colors looks classy and will complement your decor. But, I like the Dark Rosewood color as rest of the colors are quite common.

Features and Sounds Of Yamaha YDP 103

The authentic Yamaha Grampian sound is sampled in stereo for a dynamic and expressive performance.

The sound quality is good but one thing to note is the only YDP 103 does not come with Yamaha’s Pure CF Sound Engine Technology (rest of the YDP series model does).

The graded hammer standard keyboard simulates the feel of an acoustic piano.

With the preciously weighted action becomes lighter at the higher end of the keyboard.

The touch response can be easily adjusted to suit the players' requirement.

The good part of YDP 103 is that it never requires tuning and can be played with headphone for silent practice.

Modes and Function Button Use Of Yamaha YDP 103

YDP 103 also offers a range of features which enhance the playing experience, let's have a quick look.

Digital Reverb - which simulates the ambiance of different performance location in your own home.

Voices - Other than grand piano sound YDP 103 offers a selection of other voices too.

The voices can also be combined such as the piano sound and the string sound, In general term, this feature is known as dual mode and is quite common in any range of digital pianos.

For easy operation, YDP 103 features a function button on the left of the keys.

The function button is used together with the piano keys to access all the features of the instrument.

You can also connect YDP 103 via USB to a computer or to an iPad or iPhone where a variety of apps are available to control your piano.

You can select the voices, control the metronomes, reverb and the rest of the accessible feature. The best part about the app is that it can also store your favorite settings and recordings.

Yamaha YDP 103 also offers connectivity via Bluetooth. To connect wirelessly you will need UDP-BT01 adapter (not included with the piano).

Check The Below Video Of Audio Demo of YDP 103

Quick Glance At Features Of YDP 103 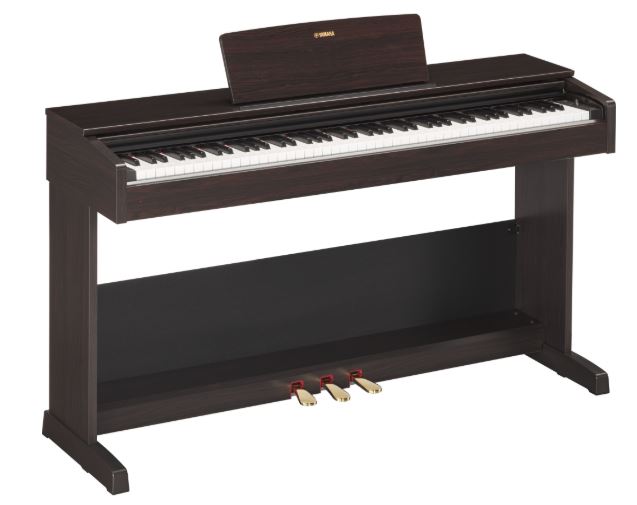 Luckily I got my hands on YDP 103 for more than 2 weeks and overall I can say it is good mid range entry level keyboard.

The sound quality is nice, it looks quite classy, the sounds on the piano is also good. I liked the Matte finish keys too but the weight is too much (116 pound) so its hardly movable. As a reviewer my main role is to point out the drawbacks here they are.

It does not have pure CF Sampling sound engine. Nor it comes with song recorder option but the other variants of Arius series does. YDP 103 offers only 64 polyphony whereas other versions have 192 polyphony and Yamaha YDP 184 has 256 polyphony.

Yamaha YDP 103 does not offers MIDI connectivity options also. And it only has 10 voices to mix and play.

As I said it is a good entry level keyboard for those who are bit dedicated towards their musical journey. If you are still confused check the big brother of YDP 103 the Yamaha YDP 163 Digital Piano.