RJ561 Electronics Keyboard - Is It Worth It ?

RockJam Keyboard Review [RJ561] : RockJam Keyboard is one of the most sold piano on Amazon. With thousands of sells on Amazon and other E-Commerce sites its hard that we don't review it on our site.

In this post we will review RockJam RJ561 keyboard piano and lets see what it offers and for whom the keyboard is designed for.

The keyboard is good for kids or if you just want to taste the water in this musical world.

I said so because the keys of the RockJam RJ561 are not touch sensitive.

By touch sensitive I mean to say that you can’t play loud and soft sound so it doesn’t really matter whether you hit the keys gently or hard its going to have the exact same volume to it.

And they keys are also not weighted keys like piano keys. If you want something digital to play loud and soft sounds that resembles a real piano than I recommend Casio Privia Digital Piano and if you are in budget check these cheap and best piano.

But as I said above the Keyboard is fine for people who are just starting out or want to play for fun and does not want to dig deep.

RockJam RJ561 can also be considered as a great gift for kids or adult who just needs the keyboard for fun.

It is nice and compact and does not take up a lot of space and can be easily adjusted. To choose a particular tone just find the number mentioned before the name and type it in the number pad on right of the board make sure you press the “Tone Select” button before pressing the numbers.

The process of selecting the Rhythm is also same press the “Rhythm Select” and then enter the desired song number in the number pad and then hit the “Play” button to start the song.

You can fast/slow the tempo of the song just by pressing the respective button. And everything will be displayed on the Display board. Which makes it quite easy to understand what’s running in behind the settings.

Also to play the demo song you just need to press the “Demo” button and select the number.

The great thing which I personally liked about RockJam RJ561 is that when you play the demo songs the display teach you how to play the song by highlighting the keys layout in the display.

It becomes quite easy to learn and understand when the display shows you which keys you need to press to play the song.

It also offers metronome function, which is very handy for people taking lessons to have a metronome so they can play at the right speed.

The keyboard also offers to record the sounds you play which is really a good add-on. And you can also see what buttons was used to play the song while recording in the LCD display.

The Best Alternative Of RockJam RJ561 is Hamzer 61 Digital piano. The Price is almost same so don't forget to check it.

Quick Summary and Why you choose RJ561 ? 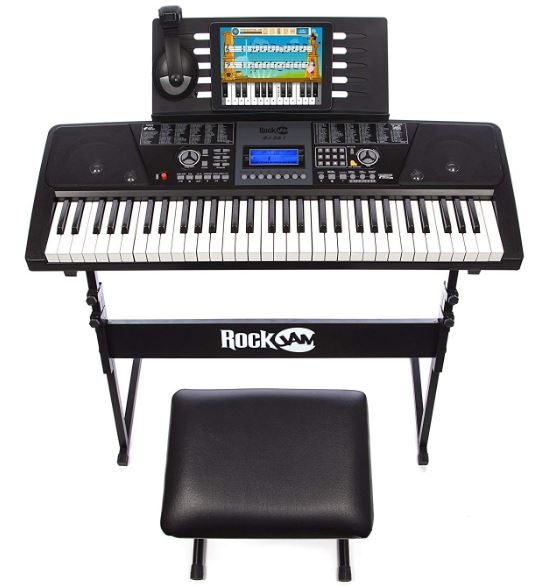 Rockjam RJ561 is a great deal because it comes with a stand, stool, headphones, and power supply everything with a highly affordable price tag.

The stand is sturdy and adjustable. The keyboard is fairly light so if you want to travel with it. Then it’s really not going to be an issue.

The stool is also heavily padded which is great for long practice as composing new songs requires a lot of time and at this price point it is something really good. However the stool is not adjustable.

Headphones are also great and perfect for practicing without getting distracted and disturbing peoples in your surroundings.

So overall I can say that if you are not serious and just looking for fun then RockJam RJ561 Keyboard might be a good option to begin with.

It can also be a good option to gift your kids or someone who like to try their hands on something basic.

But if you are serious about learning music than this not going to be a perfect option for long run. Otherwise for fun

That's all from our end. Do you found this useful? Or do you have any question or have any experience kindly let us know in the comments below.