Piano Keys – Everything You Need To Know About

how many keys does a piano have ?

Hey everybody, after analyzing tons of pianos and other musical instruments on my blog I thought of shifting my primary objective from reviewing pianos to giving knowledge and information more about music and musical theories.

So, I was looking for ideas to write about and I suddenly thought why not start with the most common question that comes to everyone’s mind.

And frankly speaking I have been literally spammed with this question thousands of time. The Question is

“How many Keys Does a Piano Have ?”

(Answer - A Standard Piano Has 88 Keys) , but lets stick to the question.

Yes this question looks quite dumb at first place but its not.

So I am going to answer this question from every possible angle, cause not all keyboards / digital pianos comes with 88 keys. so lets begin.

I am also going to expand this question slightly a bit and also explain the number of strings pianos have.

Surprised that pianos have strings ?

Real acoustic pianos have strings in their working mechanism.

The vibration of the strings produces the sound we hear.

So does this make pianos string instrument? (percussion instrument) I will answer this in the end of this post.

Coming to the main question now.

Total number of keys on a piano ?

The number of keys on a standard piano (acoustic / digital piano) is 88.

But it was not always the case.

If you look back at the history of pianos you will find that pianos were being experimented with whole new design and working mechanism through 18th and 19th century.

Although the core working mechanism was never changed since the hammered dulcimer but the design and other mechanism have shifted a lot since the beginning.

At the beginning of the journey of today’s modern piano the first instrument (which was modified later) was harpsichord.

The earlier version of harpsichord were only have 40 keys. But later the instrument was refined more and ended up with 60 keys.

But 60 keys of harpsichord were not enough as its limit the composers to only 5 octaves range.

You can still find them on vintage shop (Vintage Steinways and Vintage Europeans Pianos).

85 keys remained as the earlier standard for number of pianos keys.

Even lots of upright pianos were also having 85 keys.

what is the difference between the black and white keys

But later the trend shifted and the 85 keys version were classified as small pianos for apartments and smaller living space.

And as of now 2020 the standard set of keys on all kind of grand / digital pianos are 88 keys (combination of the 52 white keys as well as the 36 black keys).

Octave - The distance between in number of keys starting from a key name until reaching the same key name again. An octave consist of 7 white keys and 5 black keys (12 keys in total).

What are piano keys names ?

First, One of the most common technique in US is naming the keys from English Alphabet A to G. (A,B,C,D,E,F,G).

Another technique which is common in rest of the world is naming the keys as Do, Re, Mi, Fa, Sol, La, Si. This technique is known as Solfege.

The lowest note on a piano is A and the highest note is C.

What pianos have more keys ?

Some less mainstream pianos even has more then 88 keys.

A fine example will be The Beleura from Stuart and Sons which has 108 keys and is also self-proclaimed as the world’s first 108 keys piano.

Why do some pianos have more keys ?

Simple, as you know each keys have their particular notes, so more keys means more notes.

So more keys allows composers to cover a wide range of notes to compose their music.

Just for reference of notes, on a standard piano of 88 keys the lowest note on the piano is A and the highest note is C.

All of the extra notes on the above mentioned Bösendorfer Imperial Concert Grand actually are on the lower side of the instrument.

So there’s almost a full octave of notes which goes back to the lower C again.

However above 88 keys pianos are out of ordinary and chances are you will never even see one in person.

So again coming to our main topic a standard piano have 88 keys.

The 52 white keys are represented by the English Alphabet A, B, C, D, E, E, and G (followed by same set from A-G again).

The reason behind this is that C note is the very basic note on piano.

Is Piano Keys and Notes Same ?

When we talk about piano keys we generally also mentions notes.

They seems relevant (number of piano keys = number of notes) but piano keys and notes are different.

What is Piano Keys Label ?

As I mentioned above piano keys are represented as Alphabet (From A - To G) and these representation is known as piano label.

You can find a tons of designs of piano labels online, these are commonly known as Piano Keys Stickers.

What is piano keys name and number ?

There's No specific representation of keys in Number.

As far Name of Keys are considered they are represented as Sharp and Flat keys with the Alphabet (A-G) of the keys in the beginning.

What are Sharp and Flat in keys of pianos ?

The Black keys of the keyboard are known as Flat and Sharp keys.

The Sharp and Flat keys means the increment or decrements of the pitch with the respective white keys.

Here's a video explaining Sharp and Flat keys in detail. 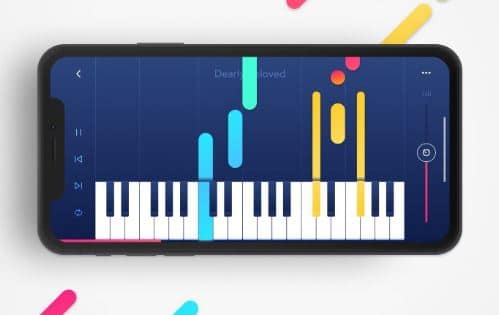 There's lots of Piano Apps and Online resources that helps to practice and learn keyboards/pianos. Here's our pick

Here's final words and summing up the whole post.

Hope you enjoyed our detailed explanation of everything related to Piano keys.