What are Intervals in Piano or in Music ?

The simplest explanation - Intervals in music is the relationship between two individual notes.

Apart from the simple explanation intervals is one of the core music theory and relates with harmony and other factors too. 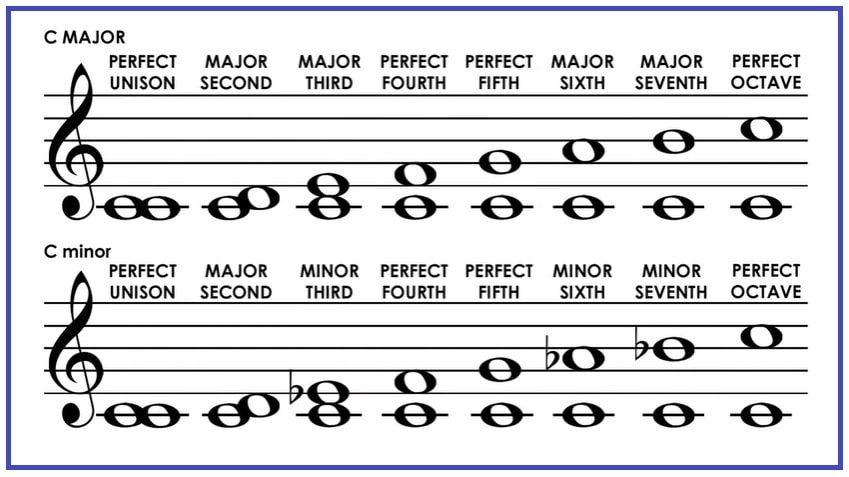 What do you mean by an INTERVAL?

The intervals refer to the space between the notes on the piano.

They are the integral part of any musical structure and are essential for ear training.

One can say that the distance in pitch between 2 tones are called Intervals.

They are characterized by numerical values and qualities.

Learning intervals brings a lot of improvement to your playing.

Let’s have a quick look on them.

The intervals are important for you to learn because :

So, let's take a look at some of the basic intervals to start :

Below are the basic & more simple way to number the intervals.

Few examples of naming or numbering them are as follows :

Otherwise, you get the number wrong of the interval. You can calculate the interval between any pair of notes.

What is Melodic and Harmonic Intervals ?

You may also hear these terms as melodic and harmonic intervals.

Apart from knowing the numbering of intervals, it is equally important for you to know about.

Which is, what kind of number (third, sixth, octave etc.) is it? So, next, let’s have a peek at the kinds of intervals. 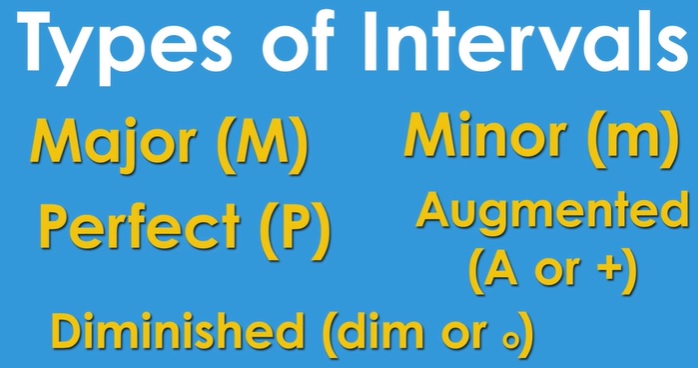 On a broader way there are usually 2 kind of intervals :

They are: Perfect Interval and Major Interval.

The perfect intervals are the fourth, the fifth and the octave.

So, when you have counted the distance between 2 notes and you find the interval of a fourth, or a fifth or an octave.

You can say that they are the perfect interval.

If the intervals are not perfect then they start life as major.

The major intervals are all the other things that are not perfect.

In other words, a second, a third, a sixth and a seventh.

Always remember, the very first thing while calculating the interval is to determine the number of intervals.

C.1) AUGMENTED – The literal meaning of Augment is “bigger”.

So, understand it like this, Perfect interval/ Major intervals < Augmented.

When you take a perfect interval or Major intervals and make it a semitone bigger, it becomes something called Augmented.

So, in the case of perfect intervals, it has the fourth, the fifth and the octave.

And just in case, you end up with an interval that is semitone bigger than a Perfect interval, you call it an Augmented interval.

C.2) DIMINISHED – The word itself says it meaning, diminishing means getting smaller.

So, if you end up with an interval that is semitone smaller than a Perfect interval, then you call it as a Diminished interval.

Unlike the case of perfect interval, when you end up with a major interval a semitone smaller, it is called Minor. (Minor < Major Interval).

And when you get an interval a semitone smaller than the minor, then it is called Diminished.

NOTE: Perfect intervals NEVER become minor. They are either Perfect, Augmented or Diminished.

To sum up, lets understand it in this way,

So, let's take a look at how the interval appear on the staff.

You may find it a little bit complicated by looking at some of the Black Keys or the half steps while playing. To overcome such complexity lets have a look at some of the following intervals.

C to D is the interval of a second. If you flatten the top note, down a half step, what you get is a minor second. The minor second usually sounds very unpleasant.

When you take a third. Flat in the top note and you get a minor third. So, there you have a more Moody and sadder sound.

Now the fourth is kind of special. As in fourth, you don’t have to flatten the top note which is also known as a perfect fourth.

But you can raise the top note to create what's called an Augmented fourth. When you raise it by a half step, then what you get is the Augmented 4th.

You can play a fifth which is also known as a perfect fifth.

If you raise the top note of that perfect fifth, once again it's called augmented. Thus, called Augmented fifth. It sounds a little bit intense.

You can also lower the top note of that perfect fifth and create what's called a diminished fifth. If you play an Augmented fourth, the diminished fifth are the same thing.

Another way of learning and understanding the intervals is by hearing it. Wonder How to do that, Just check the below video. 👇

So, those are pretty complicated piano intervals.

But this would give you a basic understanding of:

What the intervals are;

What they are called and How they sound.

Thus, I suggest you to play these intervals starting on a variety of keys.

For noticing the distance of half steps what creates the interval of a 3rd.

So, you have got 2 full steps, a minor 3rd is three half steps.

You can look at a 5th the same way. As it is counted as seven half steps.

A 7th is made up of eleven half steps and so on.

What you have to do is, see them on the staff as well as hear them.

Think about how each of these intervals makes you feel or what it maybe makes you think of.

So that you can start to connect feelings to the way this sound.

Try to play them often. Play them in many different keys.

The more you play the intervals and make it an intentional practice, the more it will integrate and become part of your toolkit as an exceptional piano player.